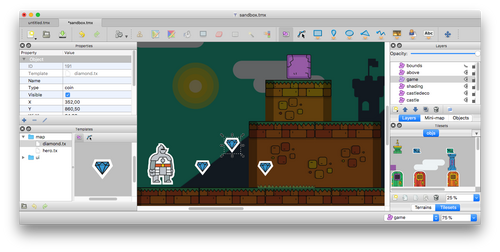 The biggest change in this one is the removal of the "template groups". Template files are now organized using regular file system folders. Template instances store a relative path to their template, rather than an ID that needs to be looked up in a template group. All in all, this was big simplification that obviously needed to be done before the release. Feedback is welcome, as always!

Another noteworthy improvement is that the --export-map command-line option is now able to read from any supported format, instead of just TMX files, and that in addition to all export formats, it can now also write TMX files.

Last but not least, this is the first development snapshot that includes a build for macOS on itch! This build is done using Qbs instead of qmake and updates Qt from 5.7 to 5.9 so do also let me know if you run into any issues.