MapTool Export and Other Improvements 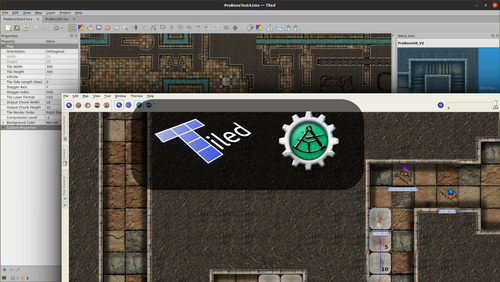 This snapshot adds support for exporting Tiled maps as RpMap, the format used by MapTool, enabling Tiled maps to be used in this Virtual Table Top application! Currently, support is limited to maps using "Image Collection" tilesets since MapTool doesn't support tileset images. Support for this could be added by automatically cutting apart the tileset and including it in the export, if there's demand.

A lot of work also went into supporting rotating and flipping Wang tiles. This means some tilesets (like this blob tileset) only needs 15 tiles (instead of 47) since Tiled can now rotate the tiles as needed.

A number of fixes have been made as well and the scripting API can now be used to load, inspect, create and save images.

Finally, this is the first snapshot that is also available as a snap package, at least for amd64 architecture. Until now only a bleeding edge version was available on the "edge" channel. The snapshots are instead published in the "beta" channel, and will update automatically  each time I release a new development snapshot.