Scripted Tools and Other Improvements 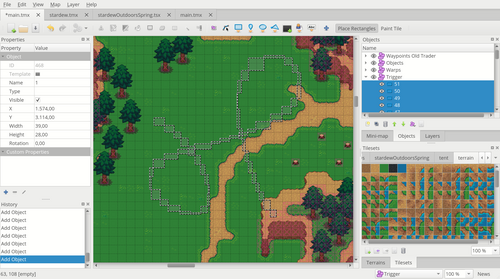 Most of the changes since the last snapshot are related to scripting. Now image layers and group layers are supported by the script API, and undo commands can be collapsed by using the new Asset.macro function. Last but not least, there is now initial support for scripted tools. In the attached screenshot, an array of rectangle objects was drawn using the example tool from the documentation.

A few other noteworthy things are the new Swedish translation, support for rendering entire worlds in the tmxrasterizer tool that ships with Tiled and icons based on the object type in the Objects view!

Many thanks to all who contributed to this release!