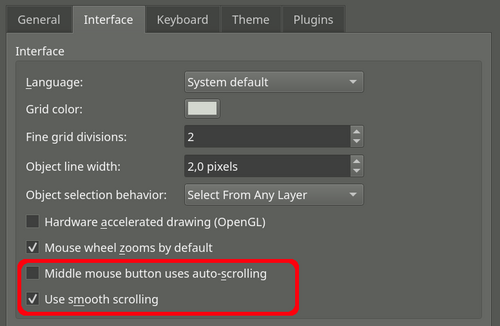 This snapshot adds two new scrolling-related options. One is to use auto-scrolling when dragging with the middle mouse button (used to create the video I posted in the last development snapshot) and the other is to scroll smoothly rather than in steps when moving the view with the arrow keys. A number of small improvements and bugfixes have been made as well, and some translation updates were merged.

Tiled is now in String Freeze for the upcoming 1.5 release. This means I've updated all the source strings for translation and don't plan on changing them again until the release, so translators have a chance to complete the translations. I hope to make the 1.5 release in 2-3 weeks.

A big thanks to all the translators for these updates!

Your Feedback and Support

I'm excited to soon get Tiled 1.5 out as the new stable release, with all the improvements made in the recent development snapshots! It'll also be exciting to decide what's next to improve. You can help shape the future of Tiled, by giving feedback on the Tiled forum or the Discord server and of course by donating, so that I can spend even more time on Tiled! Thank you!